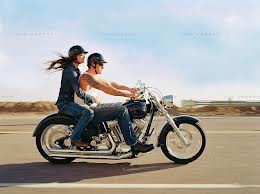 Rode into town about a week ago,
Won’t be long before I’ve got to go.
Thoughts of staying playing in my mind;
But, Gypsy Lady I’m the restless kind.

Gypsy Woman ride along with me.
The open road ahead won’t let me be.
The engine’s serenade will set us free.
Gypsy Woman hear the symphony.

I feel your body pressing close to me;
We’re riding fast, we’re feeling wild and free.
Gypsy wind is blowing through our hair.
When I’m with you my life’s without a care.

Gypsy leathers never looked so fine.
I think about you, Lady, all the time.
Don’t want to beg, don’t want to lose my pride.
You haunt my dreams, I need you by my side.

Gypsy Lady let me hold you tight.
Don’t leave me cold and lonely through the night.
Your flashing eyes see inside my heart.
Gypsy Woman say we’ll never part.

Saturday found me at the Shadrak,
a downstairs club that had it all.
A woman took the floor in glad rags.
I felt I was in for a fall.

She spied me lounging in the corner.
My eyes caressed her every move.
She beckoned me over to the dance floor,
sleazy blues had us in the groove.

She was a tall sleek woman with a class act,
slumming and feeling so high.
Knew this was wrong — her legs were so long,
dress was cut up to her thigh.
She had to be a wife or a girlfriend,
no man would let this woman slip by.

Soft fingers stole away my reason,
for her I’d do right or wrong.
Flash of a thigh, wink of an eye,
she played that dress just like a song.
Maybe her lips, or the sway of her hips,
she had my number all along.

The scene couldn’t have been sweeter,
‘till Johnny sauntered through that door.
Cursed us a while, said we were vile,
reputations trampled to the floor.
Should have walked away, that isn’t my way,
his accusations cut to my core.

No backing down for right or for wrong,
for her I had to settle the score.
Glint of a knife, the end of a life,
Johnny lay dying on the floor.